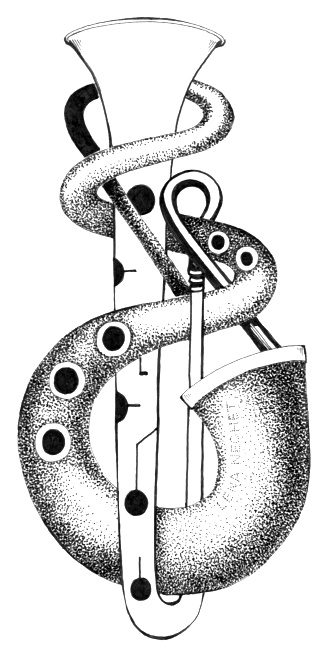 This is my illustration of two historic musical instruments, serpent and ophicleide, which was published in September 2017. 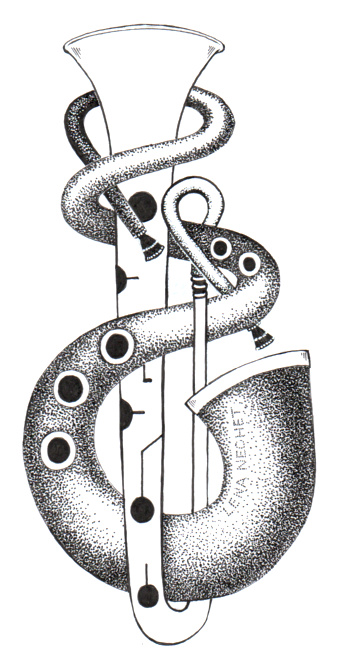 I rendered two initial versions in archival ink, and one - made with more realistic details of the mouthpieces upon request - was preferred by the client.

In the final render I have removed some of the deep blacks, adjusted the details, and finalized pointillistic shading.

The main challenges of this work were:

Initially, I placed the both intertwined musical instruments in front of an abstract figure of a musician: the outline of the silhouette was supposed to emphasize the size of these giant creations. But the drawing became very busy, especially because of all the details I kept to satisfy professional musicians who ordered the piece. I removed the figure.

Below you can see the drawing's published page, and read the original feedback to this illustration. 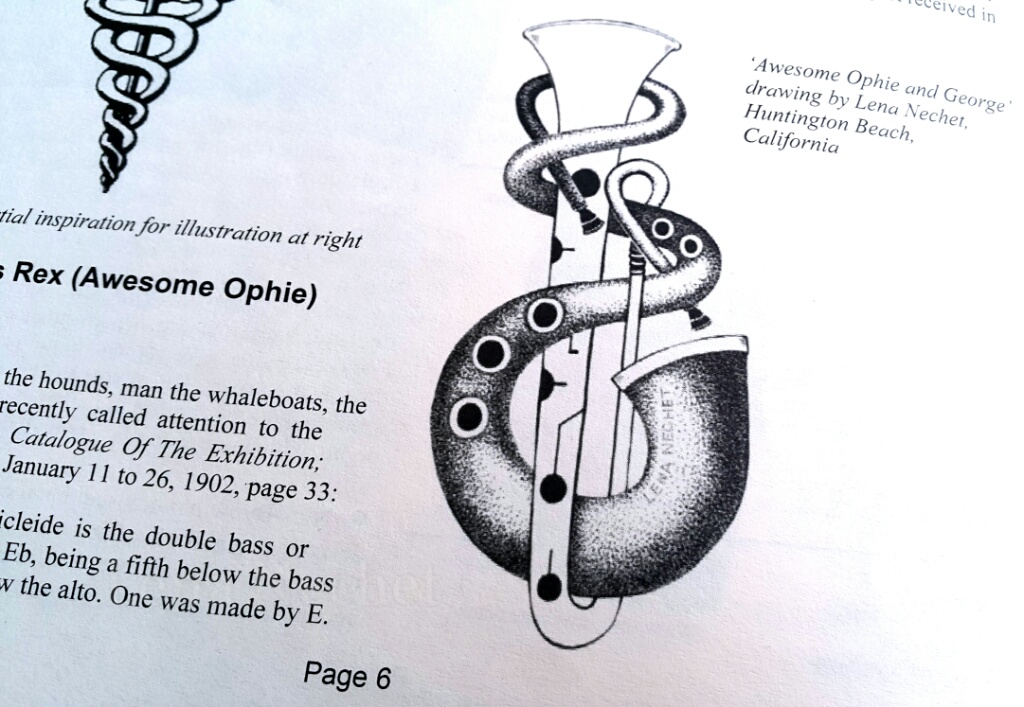 The illustration by Lena is superb. It resonates deeply with me!

The “Caduceus” is, as I’m sure you know, the symbol of the medical profession with two intertwined snakes:

Jaron’s piece capitalized on this theme, of the serpent and ophicleide being related “snakes,” and the intertwining of the two duet parts in very creative ways. People who heard our performance said that when Scott and I were playing in unison or octaves, many overtones were produced that rang through the hall. It was quite something! So Lena’s drawing is the PERFECT metaphor for Jaron’s piece. In addition, I used the python skin covered serpent that Keith Rogers made for himself in 2001 and that his widow, Katherine, gave to me when Keith died in 2008 (photo attached). It seemed like the right instrument to use on this piece - after all, I do live in Arizona where snakes are a way of life.

Like Paul, I am VERY captivated by Lena’s drawing, and see many possibilities for it for serpent and ophicleide players. I would love to use it myself - I don’t know how, but I know it is fantastic and has a lot of possibilities.

Did Lena just dash this off for fun or would there be licensing issues if I wanted to post it on my blog when I write about the Symposium? Like Paul, I definitely see a t-shirt coming from this. Maybe a coffee mug! I don’t know. I DO know that the image is superb.

Let us know your and Lena’s thoughts on this. She has done something quite evocative and special!

An illustration of two historic musical instruments, serpent and ophicleide, which was published in September 2017.