Hues are what we usually call colors in a regular language, but separated from color value and saturation.

Color temperature appears to be a term that causes quite a bit of confusion, so we will discuss it in detail.

Hue and Temperature of Color

Unique hue is the degree to which color can be described in a common language as a specific color, like  red, yellow, green, cyan, blue, and the way to distinguish one color group from another. Hue fuchsia (magenta) is based not on one wavelength, but on a mix from the opposite ends of the visible color spectrum.

Light is visible to the human eye as hues in frequencies 400 - 700 nanometers, known a wavelengths. Hues are not just a physical phenomenon but are also created by our brain, so colors we see can be combinations of the hues. Light, heat, and hue are three ways to express electromagnetic radiation.

The color hues are classified also by temperature of light, in Kelvin degrees, and divided into cool and warm colors.

Kelvin (K) is the SI base unit of thermodynamic temperature, equal in magnitude to the degree Celsius.

Hues in HSL color model (hue, saturation, luminosity) mark positions on a color wheel measured in degrees as in defined in mathematics: 360 degrees in a circle correspond to positions from 0 to 359.

The higher the Kelvin rating, the whiter the light. The higher the physical temperature of the object, the shorter wavelength color it emits.

For the sources of light, physically, blue is warmer than red, which the opposite to the traditional color temperature division in arts based on human experiences:

However, psychologically, relative to experienced temperature of objests:

Magentas and greens can be perceived both as cold and warm hues (colors, in common language). These hues and all other families could be described as having relative temperature: warmer or cooler in comparison with other hues. For example, even though all reds are warm hues in general, medium reds are cooler than oranges, and warmer than purples. Blues are cooler than turquoises and greens, and warmer than violets.

And here you can find the biggest contradiction in temperature description among many artists in USA versus almost all artists in Europe, which was bewildering for me in the first years in US as a European. In so many educational materials here, blues between cyan and violets are treated differently than other hues: they are considered warmer if closer to magenta!

I traced it to a few old books by artists unfamiliar with all aspects of color theory. Then I found that interpreters of the mentioned above HSL color model, created for television, feel like the wavelength does not matter and make cyan the coolest color of all, regardless of its frequency.

Here is an opinion of an international color expert:

The absolute value of warm is at 0 degrees. A color cannot get warmer than this red. The absolute value of cool is 180 degrees. A color cannot get cooler than cyan. <...> You can determine the color temperature of any other colors by its proximity to these two absolutes. Colors that are closer to red than they are to cyan are warm; colors closer to cyan than to red are cool. <...> Please note that cyan is cooler than blue as you saw above on the HSL wheel above.

It seems like the author has based their opinion on a single model that does not take into consideration the physical properties of the light. It is well known, that HSL color model serves well to choose a single color, but ignores much of the complexity of color appearance. Furthermore, HSL adds magentas in the end, at 300-330, next to the blues, not taking into account that some of magentas have more red in it, and some - blue. Thus, a division at red (0) and the opposite cyan (180) serves no purpose for temperature identification. The fact that the article by his author comes up first in US searches is very strange. 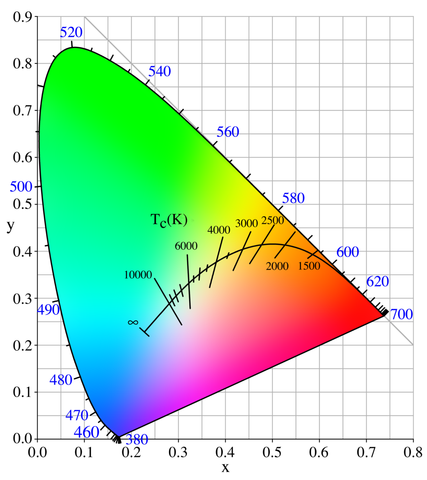 On magenta, the color wheel closes the wavelength axis and demonstrates the interpretation on mixes of the most-long and most-short waves by our brains. Magenta and its opposite true green should be the division points: one as an optical combination of waves, and the other as the middle of the perceived spectrum. It makes very little sense, at least for me, to brake the wavelength line on cyan.

In the traditional color temperature model, the temperature changes between warm and cool at greens and magentas.

On digital screens, true black and white signals with minimal color saturation are achieved at a color temperature of 6500 K. - the neutral colorless daylight, white as a perfect additive mix of all colors. It is like the white balance in photography and basic color correction in videography.