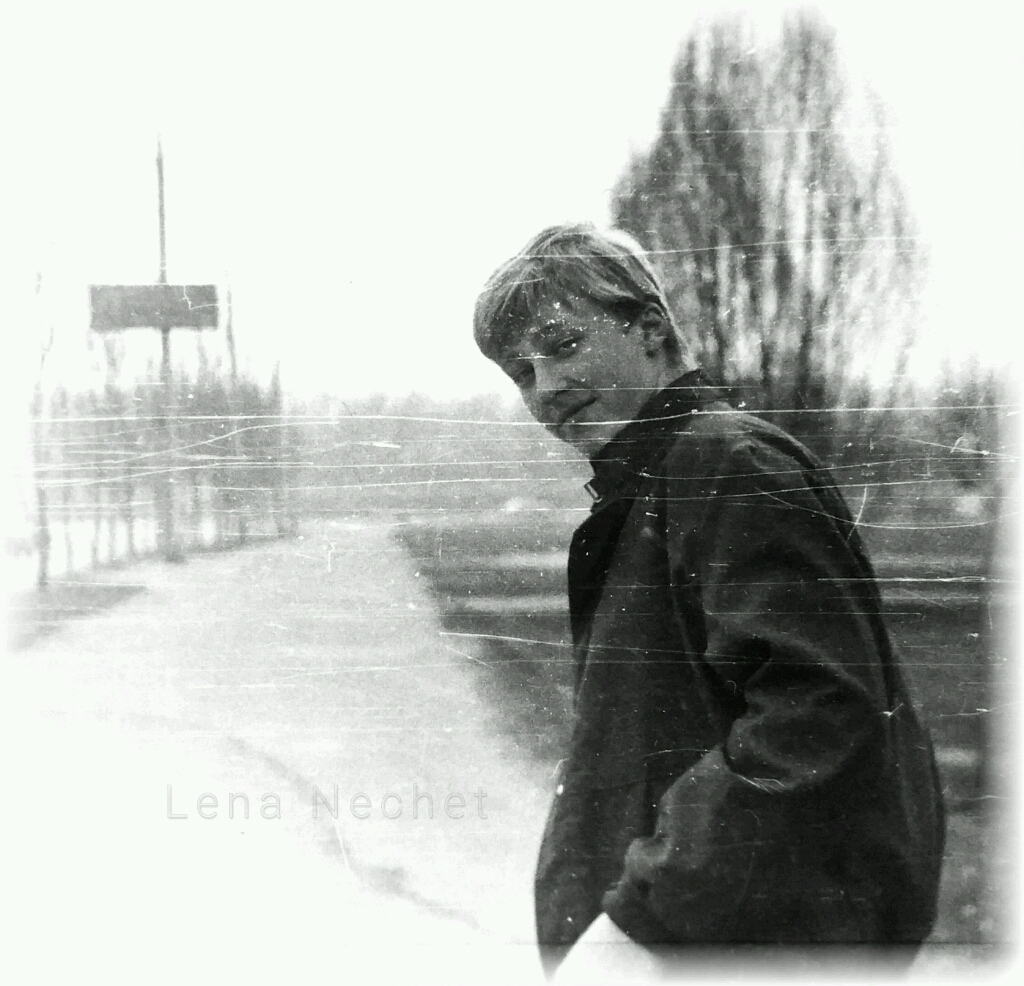 After returning back to the country, I was enrolled into an old red-brick building school with strict rules. One boy in my class payed quite a bit of strange attention to me, often in a naughty or disruptive manner. I ignored him for a while, but something in his daring persistence appealed to me, as well as his exceptionally good looks. We started talking, and then started going for long walks by a river.

This photograph I took on one of the walks. I just started with dark room back then, so this film was poorly processed.

When my class manager, an ultra-conservative stalinist teacher, noticed our getting close together, she took me out of the classroom one day for a personal talk. She warned me about the boy: bad family situation - a single uneducated mother of two, dead father - and his certainly criminal future she was predicting. I irritated her with disregarding her assessment.

She also noted, that for a girl like me, with parents like mine, I needed to choose completely different sort of boys. Her son was in our class and was competing for my attention. So she blatantly placed him into the deserving category for me. She then invited me to her home, with another schoolgirl, and fed us meat cake, telling us that her son - present and silent - needed a special diet, and that we, girls, need to learn how to cook. It was unreal. She was destroying her boy's reputation.

The boy I liked I introduced  to my parents. We started meeting every week not only for walks, but also to hang out in my room, listening to music - for a couple of hours only, because I had two schools, six days a week, and tons of homework.

Once, on a walk, a few months into our relationship, he kissed me, very gently, and it was the most wonderful thing. It took us a while to kiss another time, but then we started getting more and more intimate. Any proper sexual act was entirely out of question for me at that time, but we certainly pleasured each other in multitude of ways, discovering sensuality together.

I helped him with math and other subjects, asked my father to advise him on the future career - other than physical labor, with which his mother was setting him up. After leaving that school myself for another one, I also supported him in changing schools to avoid systematic down-putting by the current team of teachers. He started making great improvements, and eventually finished the new school with notes good enough to study dentistry.

We ended the relationship when I realized that he changed towards me. First, he did not show up one evening without warning me. He did not have a phone at home, and did not want to walk to the telephone booth, he said later. I spent the Saturday evening alone, worrying that something happened to him - he lived far from my place and usually walked all the way to my area. When I asked him what happened, he told me that he was not my toy, and that I was just manipulating him, without giving myself or promising anything.

Yes, we did not talk about future. I was not even imagining mine together with him. But I did not know he was unhappy about anything until the very end. The way he dealt with our separation upset me a lot.

His mom were complaining to the same teacher and others that I were sucking out all the blood out of her son, in presence of other students, I was told. A couple of girls from parallel classes had a crush on him and started mimicking my manners and style, which felt like caricature to me. I needed to demonstrate my separation publicly.

I started seeing a popular guy in my class, without even being properly attracted to him. I needed a destruction, I was curious, and I used his status to support my pride. This  awesome boy would get into drugs and die a few years later. But at that time, he was the best looking guy in school, so charming. Kissing him felt weird, so I moved on soon, despite his hilariousness, dark deep eyes, and the sport-cut blue uniform, unlike the brown blazers of others. I remain superficial like that till this day.

All this was in the aftermath of the tragedy in my first boyfriend's family: his little sister was diagnosed with and soon died from leukemia, so they were dealing with the loss I could not even grasp. I was not angry at him, but I never offered my support, just expressed my sympathy. His mom had probably became overly protective towards her remaining child, so when she bitterly complained to our teacher that I were arrogant and never even visited, I did not argue that in fact I did visit once, but was never invited back.

Soon after breaking up, I received a call from an unfamiliar girl, who told me she was his friend. Then she ave me her number and asked me to call her back because of a bad connection. I did, and she suddenly told me that I must back off and stop harassing her. Then she hang up.

On one of the next days, my ex-boyfriend told me that he was disappointed in me for unwanted reaching out to the daughter of their family friend. He did not even believe me at first, and kept saying: "Did you call her number or not? I heard it!" He would not listen to anything else after my "yes."

Then, the girl who called me, together with her female friend - they both looked quite a bit older than us -  followed me on the way to school, and after demonstrating their diamond jewelry and bragging about family gang connections, threatened to bit me up in the restroom.

I called my ex-boyfriend and asked what was going on. Somehow, he figured something out, and came to guard me in school for the next several days with his friends.

He told me that he had a real sex with that girl, and that he needed it, because I was not giving him anything for real. His mother found her suitable, and he was proud that she was really into him, even though she was overweight, she was a real woman. He also gave me a few intimate details.

I cried alone at home, sitting in a blue-green bathtub full of scented water, shaking like a leaf and trying to concentrate on the lilac color of my skin.

A while after, I met my first boyfriend on a street, and he described to me a pornographic book he was reading, implying we could have done a few things better, and suggesting I should improve a technique. I was puzzled and sad.

I met him once again, when I was already 17: he thought we might get together again, I did not think so. Later, he sent me a long letter, saying that I had changed, and he did not like me anymore. That was true.

Our common friends told me years after that he married early, after getting a girl pregnant. He gave his daughter my name, but I hope not because of me.

A story about my first relationship with a boy in adolescence.
Life